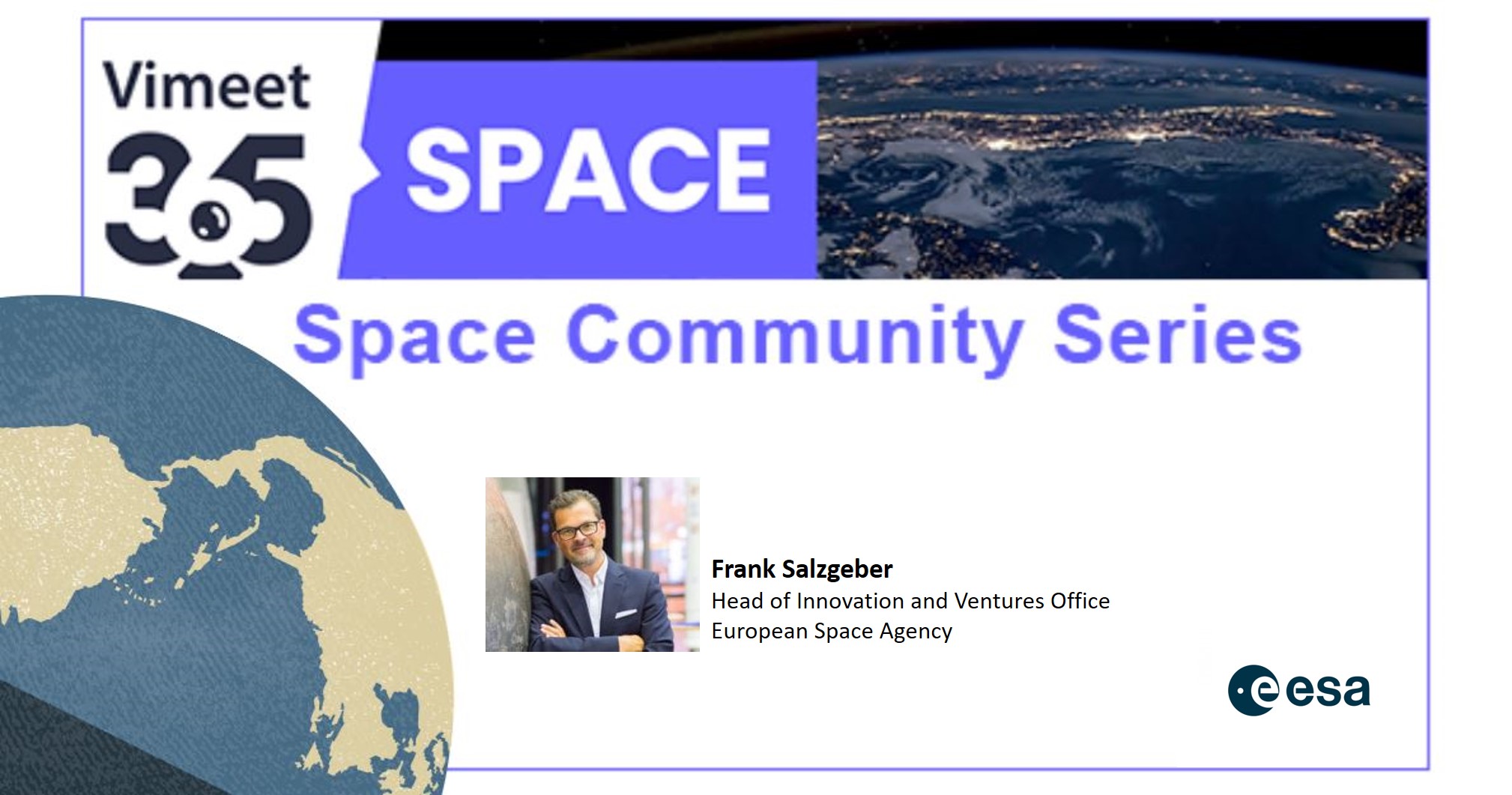 Frank Salzgeber is one of the Vimeet365 Space's ambassadors and is the Head of Innovation and Ventures Office at the European Space Agency. He shares his insights on the current developments in the Space Industry and how useful a Space Community will be for the Industry.

1. What is your vision for the Space Industry and how well do you feel it is coping with the current situation due to the pandemic?

I think I would really split it between two sectors, one what the agencies like ESA and big companies are doing and the second is what the start-ups are doing. Looking back to the last 18 months, the start-ups adapted immediately. Mostly because they are internationally placed and just need an internet connection to do their business. It’s not to say that they are fully virtual already, but currently, big part of their organizational structure is based on doing business virtually. Now that we talk about the big industries, or to say the industries that have been doing business for a long time, had to take time to adapt to the work from home culture. So, I think, they were a little bit more on the slower side and the agencies were similar. It’s typical for a crisis, you have ways to act on it, and as an officer in military I learnt that you start immediately to act and not wait, because you never know when your comrades or the helicopters are coming to fly you out. That also means that you have to look for new resources and manage them properly because you don’t know how long the crisis will last for. Covid-19 is a very good example, and I think that it is a stress test for this industry, which is good, as having someone in stress creates a more proactive response from them, which is great for the industry. We were a little bit astonished seeing the amount of proposals and funding still going around in the Space industry. So, for new Space and Start-ups, this crisis was not harming at all. Crisis accelerates the situation in both positive and negative, people who are not very professional become less professional and people who are professional become even more professional, so I believe it becomes sharper, more black and white, which is good, because then you know where to invest and where not to invest.

2. What are the major areas of focus in the near future and your vision for the recovery of this industry as we get back to normal life?

First of all, I don’t think that the word “recover” is right for the Space industry, because when you make a change in the system, the change maintains in the long run. Every crisis is good if you are ready to create something good out of it, and it is up to you if you want to focus more on the negatives or more towards the positive aspects of the situation. That is what the start-up community did, they are coming with a fresher and brighter mind set, therefor were more positive. There has never been this much money in the market for the industry as there is at this moment. So, if someone complains that they were not able to conduct good amount of business during this crisis, I would say that the product they are offering is the problem not the situation or the customer. It is harder for companies that don’t have competitive product in the market, which makes it easier for the customers and investors to filter the ones that are better and more futuristic. However, I believe that the investors understood that now is the time to invest in the industry, and everyone realized that the Space industry is the backbone of our digital economy. Navigation, because its more than just finding where to go, it’s about time signals that need to manage the electrical grid, especially in these renewable energy times, the Earth observation which is really important and also communication, which is even more important during these times, connecting the people around the word without dropping any signals, therefore Space technology will be the backbone of IoT. Some people still believe that Telecommunication is about the satellite dishes on the roof, but it will be 5G, 6G from the orbit. Connectivity is what helps in education, which further helps in bringing people out of poverty, and together they are the driving force for any democracy. So, I think that the data communication part will be much more hyped in the coming future than what we have seen people think about Earth observation. You can only work from home or connect with other people around world because of connectivity, so it’s much more important than the other things.

3. What is your vision for the Space Community and which key features on the Platform do you believe would be beneficial for the Industry?

Remember Adam’s family? The Space industry was like that, we are the monsters who have neat tricks and appear super cool, but we are the freaks for the outside world. I don’t think that is the reality now, New Space is opening up to new partners, companies and users, which is very refreshing to see. Then we have to distinguish between what we do in Space, which will be driven more by new business models, for example, how are you going to buy power, oxygen and water with a five-year contract from a supplier on the Moon, which would be interesting. The other part is that I would like our communities to open up even more, which is the part for the Platform. How we can get right people from other communities. Most of the innovation is done on the edge of different communities where they crossover, not within the communities. So, I understand that this is the interesting part for the Platform, where we have the chance to meet new people. The best example is of doing a group project, when the team is a “Mixed Pickles Team”, a mix of start-ups, agencies and established companies, that is when they are creative, because there is friction, different viewpoints, which is the same for a party, the best parties are those which have people that you do not know because then it is interesting but when if it’s all the people that you know for years, it is so boring. So, this is where we need to mix and shake the communities, as then we get new vibrations and new ideas. This is when we start to see the big picture, or like what Mr. Hawkins once said, “Let’s look up to the starts and not down to our feet”.

4. Why does the Space Community need a digital platform?

This is something that we do, as ESA, for the start-ups, sometimes you need someone in between who arranges the marriages or to bring people together for them to start a dialogue. Sometimes you get lucky that you sit with the right people on the train or your flight and you have a super interesting discussion, for me at least, a lot of corporations have started like that. I was sitting in the audience, I met somebody, we had a couple of drinks and shared views, and realized that we have more in common than we thought in the beginning. So, you need a catalyst, and a platform or an event can be that. Also, if we go back to the first question, there are big lessons learnt coming out of the crisis that only online platforms will not work, you also need something physical. Some of the start-ups I work with said that it is very hard to find new partners and customers because they are not able to discover us. Sometimes you need events and sometimes platform, and I would say, you need both. You need them to have these dialogue and to start seeing things that you didn’t see before, which is key to innovation. You need both, planned and unplanned innovation, this is what you need for evolution. You cannot cheat evolution, you can either evolve or die out. If you name companies like Kodak, that have not evolved and were too blind to see, they just die out, which is not bad because somebody else will take their place. So, I believe sometimes you need an active stimulus.